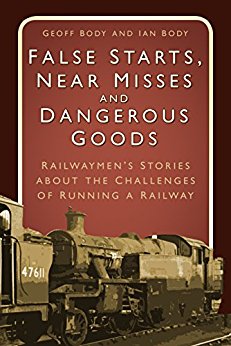 False Starts, Near Misses and Dangerous Goods by Geoff Body and Ian Body

“False starts…” is a collection of ancedotes from railway workers and managers working for British Rail and its branches and predecessors, covering day-to-day work, crashes, scheduling, and the sometimes downright bizarre incidents that make up life as a railway employee.

Published by The History Press, this a very slim trade paperback, only 160 pages, which is partly what caught my eye. The front cover, a red background with text and a sepis image of a steam train tells you exactly what the book is about.

There’s a table of contents at the front rather than an index at the back, but the front and back matter is very little, restricted to an introduction and glossary at the front and an advert for another book by these authors at the back. The rest of the book is taken up with the promised anecdotes.

These stories, related by railwaymen and retold in third person, are accompanied by black-and-white photographs throughout, showing examples of problems like derailments, and the locations where the stories took place. These are focused on the trains, so don’t worry there aren’t any images of a gory nature to put readers off! “False Starts…” is perfectly safe for children but it is not written for them, and it might go over their heads.

Overall I have to say this book would definitely appeal more to people who already have an interest in railways or history. Despite the title, it is more interesting than funny, although there are a few chuckles in it. Some of the more unusual stories include finding a signal code for “emu on the line” in Britain, and the careful wording used to slip the station cat’s milk onto expenses.

I found it a little dry in parts, but some of the stories are fascinating, and others unbelievable. The authors really have gone above and beyond gathering these stories, and contributing a few of their own, and while the ancedotes are brief rather than detailed, they are a good snapshot of life on the rails and the transition from steam to electric in the UK.

It is an interesting read, not one I am likely to come back to, but if I was researching anything about trains in that period, or setting anything in a rail yard or station, it would be a really useful resource.