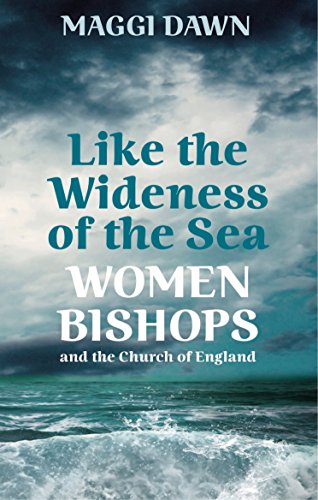 Like the Wideness of the Sea by Maggi Dawn

In the ongoing discussions about the ordination of women to the priesthood, Maggi Dawn has penned this short tract to say her piece. A former priest who has taken a hiatus from the Church of England it should be no surprise that she argues in favour, but her experiences in the Church make for interesting and sometimes disappointing reading.

The book contains a brief yet detailed history of the debate, including the argument between More and Tyndale. What it does not answer or rebute is Paul’s statement on what makes a priest: that he must be “the husband of one wife” and that therefore people who object may be following the Bible. To be fair, most of the objectors Maggi Dawn mentions are not objecting on Biblical grounds, but more due to good old-fashioned sexism, and one of the comments she relates even includes the phrase “you women” used in demeaning fashion to someone of equal rank.

Called to the priesthood in the early 90’s, Maggi details her personal experiences in the church. Several of the incidents she covers speak not just of an objection to women priests but a contempt for women in general, including those who are the parishoners who the clergy are supposed to serve. It is hard not to reach the conclusion that certain priests are certainly not gentleman: the leaflet leaver comes across as an arrant coward, and spitting on someone disgraces their office. She does point out that there are clergy who object to females ordination, but are capable of being polite, and the amount of support she received from other clergy. She also covers her decision to leave then church in 2010, and the new role she moved into.

I was expecting more detail on the theological issues over female ordination, which are barely touched on. What it does provide is food for thought about the treatment of female clergy, a history of the role of deaconesses, and some personal anecdotes that do not speak well of the church. Many of the problems she raises are not exclusive to the church: the issue of dress, of being called “shrill”, are similar to issues related by women in other male-dominated workplaces.

I am not certain how interesting this book will be to a lay-person, indeed it may well tarnish their view of the church, but for any member of the clergy looking into it, I think this would be an enlightening read. Aside from the main debate there are some fascinating ideas here, with a lengthy chapter on the role of waiting in faith and whether it is right to take action or if Christians should wait for God to show the way. There are also some interesting facts here, e.g. I had no idea of the long history of deaconesses in the Church.

Physically it is a very slim paperback, with a cover that shows a photo of the sea with the title above it. The back cover has a colour photo of the author alongside the description. The text is slightly small, and the back is made up of a bibliography and several pages of ads for other Reverends’ memoirs.

I would not say this was an enjoyable book, but I would say it was thought-provoking. For anyone following the debate on women in the clergy it is something I would definitely suggest reading.