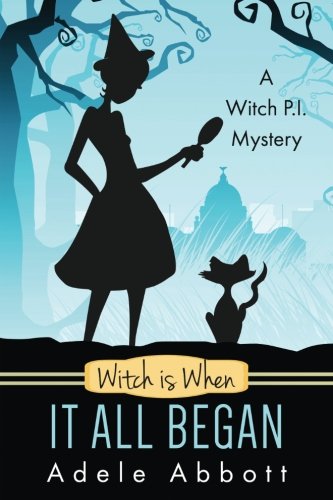 Witch Is When It All Began by Adele Abbott

I got this from Bookangel after I volunteered to take part of their review queue off their hands. It was one of the ones from the London Book Fair so I apologise for taking so long to get round to it.

It has the single best introduction to a hidden magical world ever, and a funny reminder that Harriet Potter might not have been so delighted to hear she was magical. The covers are excellent and the theme for the series  – a P.I. discovering she’s a witch, but having to balance using her powers to solve cases with getting legally admissable evidence –  is really unique.

The books are well presented and excellently produced. The only thing that threw me slightly was a lack of page numbers in my copy. There were no typos or major grammar issues, and those there were were a matter of differing taste, not author mistake. The plot moves along quite nicely, even if it is a little slow at times as it introduces us to Jill’s world – and then her new world…

The story has a very real world base, and Jill’s concerns are focused more on the case than the new family and powers she has discovered. She is a likeable series lead, and discovering her powers along with her is a genuine reading pleasure. I did like Jill’s reaction to her adopted family coming back in, and think it is more true to life than the sunshine-ever-after that TV tends to show.

If this book has a weakness it is that because it spends so much time setting up the world for the series, it doesn’t focus that much on the main mystery. It also means that a lot of things go unresolved as they are setup rather than plot.

There are questions unanswered and a few statements that ring hollow, like mundanes being protected from magic for the good of the mundanes because they are so helpless. That only applies to benevolently-minded supernaturals, and there has to be some reason why the less civic-minded don’t just takeover.

Jill doesn’t really think about the consequences or ethical issues of her new powers and I do hope this is something the series will explore later.  For this book she’s so giddy about finding she can eat a cake twice I can forgive her a lot. Being able to talk to her cat is an nice bonus, although he is self-centred beyond even the usual feline: for once the talking cat, instead of conveying mystic wisdom, wants food and new blinds to scratch.

As a standalone read it leaves a lot of loose ends, but as the start of a series its entertaining and made me want to read more. For anyone looking for an  adult version of Harry Potter, this is ideal. It should captivate its intended audience enough to buy further books and is certainly a promising start.

Overall, this is a light relaxing read that goes great with tea and biscuits, or an afternoon break.

It is available free in ebook, so Kindle owners might want to check this out.